I have to admit that my journey to where I am today is fairly well documented but I’ll recap as briefly as possible.

In 2015 I gave birth to twin sons.  Because of my age and my weight, my pregnancy was deemed ‘high risk’ and I was very careful with my nutrition throughout.  Lucky for me, my pregnancy cravings were fruit and vegetables so I was fortunate that my weight increased by only 27lbs, but this still made me just under 16 stones.

After the birth my weight went back to my pre-pregnancy weight without any effort.  I ate normally, exercise was out of the question because I was recovering from a C-section and 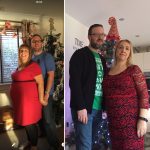 my milk never came in so I can’t put my weight loss down to breastfeeding either.  My body just did what it did, but I was still the wrong side of 14 stones with twin babies to look after.

My husband knew how unhappy I was with my body and I made a promise that I would take better care of my body after it nourished and delivered 2 healthy babies even though they were premature.  In the past i’d failed at diet after diet.  I’m not good at being told not to eat something, it makes me want that ‘thing’ even more, so I was doomed!

My husband encouraged me to give some thought to what I wanted to do to break the diet / weight gain cycle and I set about writing a private unpublished blog that I called my ‘burble’.  Here I set out what I wanted and didn’t want from a plan and while I was doing that almost daily I remember it being hot and sunny.  We decided to take the children who were now 16 months old to a splash pad to keep cool.  As all parents we took pictures, but I was careful never to be in the pictures as it was easier not to be in a picture than seeing the grim reality and ask my husband to delete the picture. 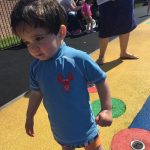 On this day in 2016, I remember being surrounded by other mummies with their children.  They were tending to their children while wearing little shorts, scrappy vest tops and strappy summer dresses.  And then there was me, wearing a size 20 skirt and a 2 layer vest to cover up.  After we went home and the twins went to bed, we sat and looked at the pictures we’d both taken, and there was one picture of me that really stuck with me and here it is.  You can’t see my face.  I didn’t know the picture had been taken at the time, but I didn’t ask my husband to delete it.

Over the next few days I kept thinking about this image and I grew even more determined to make a decision and do something.  To my husbands surprise I DID make a decision and presented him with the idea.  A well-known fitness plan unlike anything I’d tried before.  Mixing exercise and eating properly – such a crazy notion at the time, but not so now a days.

After completing 2 rounds of this plan I went from a size 20 to a size 12.  It wasn’t easy, I exercised like I never had before and I kept my food varied.  After a few months break from it I decided to go back for a third round, but this time I wasn’t so successful.  I contacted my support co-ordinatior who advised me to change-up my workout and trust the plan, but I wasn’t content with that so I set-out to learn about nutrition and of course you’re here on my website several years later!

Fast forward to present day and I love food (regular not diet food), I regularly exercise (something I wasn’t able to do again until the start of 2019 following major surgery in October 2018) and I’m no longer the same person I was back in 2016 who was looking for a quick fix, the latest fad and something that I would eventually give up on.

The pictures here are ones that I’ve posted to my instagram page to help me keep sight of how far I’ve come because sometimes I forget.

My app has over 330 of my recipes with calories, macros,automatic adjusting of recipe ingredients to meet calorie goals, shopping list generation and much more.

Learn More About The App

Get Pace To Race

The first app of its kind to deliver a virtual pacer and trainer into your pocket and is even compatible with Strava.

Run Faster – Use the virtual pacer to reach your goals.
Run Longer – Set the pacer to your perfect long distance speed to build endurance.
Get Stronger – Use the tempo & interval modes to nail your training plans.